A simple explanation of the force of gravity

To describe the electric field surrounding an electric charge, we need to describe three things. There is the energy density of the field; there is the ability of the field to exert a force on another charge and there is the electric potential of the field. The energy density and the electric potential are fundermental properties of the field while its ability to exert a force on another charge is side effect of them. We need seven dimensions to describe the electric field. There is nothing mysterious or science-fiction-ish in this. The first three are the dimensions of length width and height which we are all familiar with. The next three are what we call non-extended dimensions: they do not go anywhere. Space can be polarised because it has two layers, one of electric positiveness and the other of electric negativeness. When it is polarised, these two layers are displaced relative to one another. If we try to make sense of this in terms of the dimensions of length width and height, we get stupid answers when we try to work out the actual distance through which the two layers are displaced. The only answer to this is to conclude that the displacement is actually happening in three parallel dimensions which are parallel to the dimensions of length width and height which we are all familiar with, but different from them in that they do not go anywhere. Where does the electric potential fit in. It is a bit like the height of the land shown on a flat map as we plan a bike ride. Out on the road, the height of the road is measured at right angles to the level ground. Where the height of the road is changing as we ride uphill, it is not the height that makes cycling hard work, but the rate of change of height with respect to the distance travelled along the road. The height is proportional to the amount of work we have to do in peddling up the hill. That work has become stored as potential energy and is ready to accelerate the bike to dangerous speeds as we go down the other side of the hill.

We ride our bikes in the two dimensions of North/south and East/west and we experience this phenomena we call hills. To describe the hill, we need an extra dimension at right angles to other two. In the three dimensions of space which surround an electric charge, we need a forth dimension which is perpendicular to each of the three dimensions of length width and height. Such a dimension must also be a non-extended dimension because it is geometrically impossible to put four extended dimensions together so that they are all perpendicular to each other. The electric potential of a charge is proportional to the amount of energy stored in its surrounding electric field.

To understand the force of gravity, we need to understand that the energy held in the electric field of a charge is held in place by an electric potential which is hooked to the fabric of space in the dimension in which the potential exists. We can only think of this in terms of models of not more than three dimensions because we are creatures of three dimensions who have such difficulty in understanding perspective in painting that we probably have only two dimensional minds!

We can draw a diagram on paper (or a computer screen) in which we use across to represent the three dimensions of our world and up/down to represent the forth dimension. This is the diagram from the page on the brace principle. 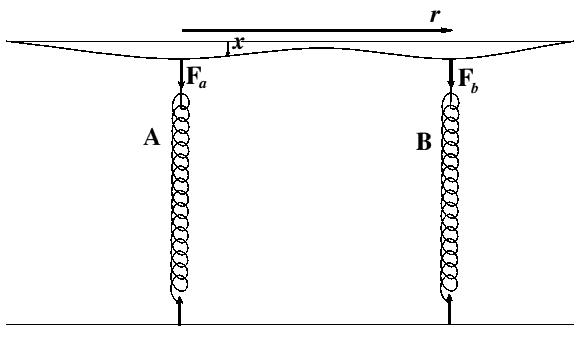 What happens is that as we hook two springs between the rails, the distortion caused to the rails produces a very small component of the force exerted by the springs to act along the rail pulling the springs together. This effect happens in nature. The potential of each electron and of each quark is hooked to the fabric of space in the forth dimension which corresponds to up/down in the diagram. The fabric of space is distorted parallel to this dimension and the resulting curvature generates the gravitational forces which act in the three dimensions of length width and height.

We might suppose that because the two types of charge have potential of opposite sign, the diagram above might need modifying so that it contained one stretched spring and one compressed spring. In this case, there would be no component of force acting between the springs and we would have no explanation of gravity. The answer to this is that actual direction of polarisation does not matter. Indeed, if we look at two points on opposite sides of a charge, we find the the polarisation is in opposite directions. Which ever direction space is polarised in, it is still pulled apart and it wants to get back together with itself, so to speak. We might try to think of this in terms of a three dimensional universe by the stress of the electric polarisation causing a measurable distortion of space, but the geometry is all wrong and it is impossible to imitate the dependence of gravity on the total energy content of matter. The geometry of the situation requires a forth dimension and in that forth dimension, it is the energy content which must be braced, not the direction of the polarisation or the sign which we might attach to a charge and its potential in electronics.

The interesting thing is the similarity between this theory of gravitation and Einstein's theory of gravity. Really, the two are worlds apart, but mathematically, they rely on the idea that space is four dimensional and is distorted by the presence of matter and that gravitational attraction is a manifestation of that distortion. I would say that this explains the success of Einstein's theory. I have tried to understand the nature of matter and of space and come to an understanding of the property of inertia which we call mass and of the generation of gravitational attraction. Einstein misunderstood the nature of time, gave it equal ranking as the fourth dimension and then assumed that the orientation of the four dimensions rotates according to the velocity of the observer. Applying this to the situation of an observer living on the surface of a giant record player turntable, he equated the centrifugal force with the calculated differences in the speed of the observers clock and of a clock at the centre of the turntable and claimed that gravity results from distortions in the rate at which time passes. By accident, he hits upon a four dimensional situation which is mathematically similar to the actual situation.


I have been careful on this page to use the classical ideas of the nature of electric charge and electric fields because this theory of gravity is independent of the developments I have made in understanding the laws of electricity and magnetism.


Learn more about the brace principle
See a mathematical derivation of the theory of gravity.
Go to home page
© Copyright Bruce Harvey 1997.